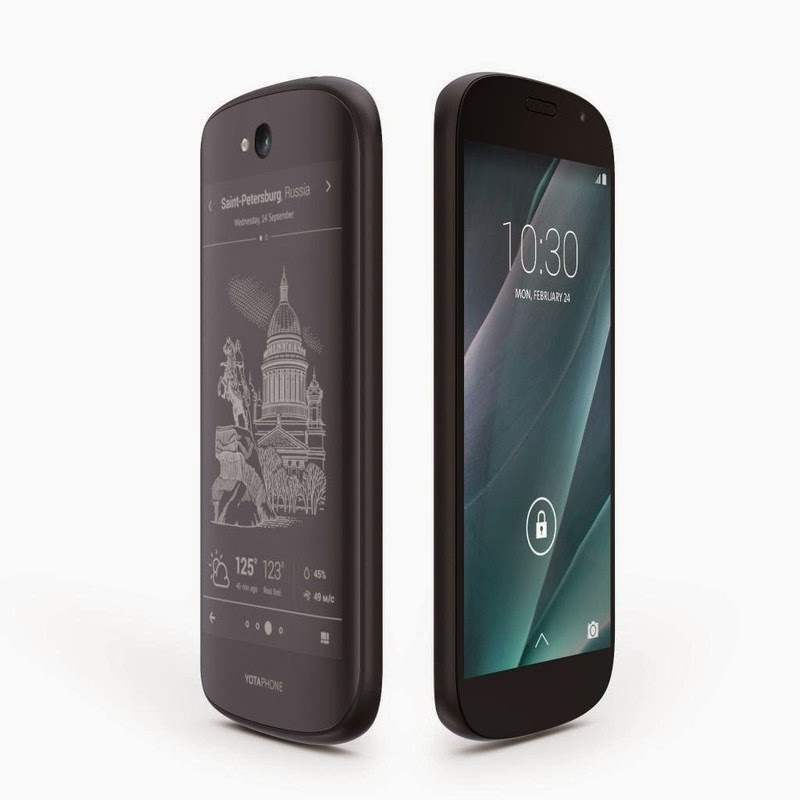 As 2014 showed us, manufacturers are sacrificing battery life for thinner, lighter devices with more and more pixels – causing their phones to run out of power in less than a day of normal use. Not many phones nowadays have a battery life of more than one regular day. There, of course, is no solution – is there?

Anybody who answered ‘No’, is about to be stunned by what is to come. To you, I say, have faith! For the noble YOTAPHONE has a successor. Excalibur has been passed on and the dual-sided Android phone’s legacy continues. The Yotaphone 2, in all its black and white glory (at least on one side) has the ability to mirror your screen onto the rear panel on the back of the device – making your battery last longer and preventing you from being plugged into a wall all the time.

Hardware wise, the specs people will truly be looking at are the lovely 4.5” AMOLED touchscreen display, which displayed the most beautiful colours of any phone I’ve seen so far – including the Samsung Galaxy S5 with its colour oriented filter. Being AMOLED, all the pixels of the display are self-lighting, meaning that to display the colour black, the pixel can simply not be turned on, allowing for a reduced power consumption. In fact, this impressed me so much that I set my wallpaper as a black block of colour to truly get the full effect.

The camera on the back of the device is 8MP, which is the same as the iPhone 6 plus, however the YOTAPHONE 2 does not have optical image stabilisation and uses a fairly stock Android camera software, which can definitely be improved. The front-facing sensor was an unimpressive and fairly dull piece of hardware, which is a problem overcome by the most interesting piece of hardware – screen number 2.
The device has large bezels to the top and bottom of the screen and average bezels either side, making the 4.5” display phone seem a lot larger in the hand. The device features a nice curved body and feels good to hold, even if the rear screen can occasionally be activated by your hand whilst using the front panel.

Which brings me onto the rear-facing E-Ink display. At 4” and displaying a full range of greyscale colours (from white to kind-of-black-grey) very similar to E-Readers. This technology means that in order to show an image, the device need not use any power. Unless the rear screen display changes, the pixels do not use any power whatsoever and so save you from charging the device all day. The YOTAPHONE 2 allows you to have a customisable panel (Called YOTAPANEL) which has slots for different software icons, for example, a row of notifications, or an analogue clock, or it allows you to have a stationary image called YOTACOVER which is customisable from their collection, all of which are free of charge. The rear side can also be used as if it were the original display, showing you the same as the regular screen should be, but without that screen being on at all – saving battery and your eyes from eye-strain.

I must mention that reading with the YOTAPHONE 2’s rear cover was a brilliant experience – perhaps it was a little too small for most people’s tastes, but instead of carrying an E-Reader around as well as a phone, I much preferred to read on the 4” display.

The second screen has a few really useful features as well. Instead of having to use the front facing camera to take your selfies (if that’s your thing) you can simply activate the camera on YOTAMIRROR and turn the device around. This will allow you to see your photo in all 8 Megapixel glory as you snap away – don’t worry, your photos will be in full colour when you turn the device around again.

Unfortunately the E-ink side does not appear to be as high quality as that of a Kindle, in that it suffers from some fairly severe ghosting issues, meaning moving images were blurred and difficult to follow on the rear side. However a Kindle doesn’t feature a stunning 4.5” full colour AMOLED touchscreen as well as its E-Ink display.

Overall what you would be getting when buying this hardware is an excellent Android phone, with no obvious shortcomings, and a nifty, if not a little gimmicky, feature that is unique to this device. If you are looking for a bit of innovation, read a lot or just want to be noticed wherever you pull out your phone, look no further. However, for those who are on a budget, perhaps this device is not for you. The YOTAPHONE 2 currently costs £555 off contract and you’d be hard pushed to find it on contract at the moment – plus with the release of Android 5.0 and no suggestion of a release date for this device, perhaps waiting for 2015’s range of devices might be a good idea?

So what do you think? Are you going to be buying the YOTAPHONE 2? Is it an interesting idea? Let us know in the comments below!

If you’re an innovator, or have fallen in love with the device at first review, the Yotaphone can be purchased from Yotaphone directly at www.yotaphone.com
Posted by PerspecTech at 17:41 No comments: